The Rough Bounds, or Na Garbh Chriochan is the area of West Inverness-shire between Loch Hourn and Loch Shiel, comprising the districts of Knoydart, North Morar, Arisaig and Moidart. 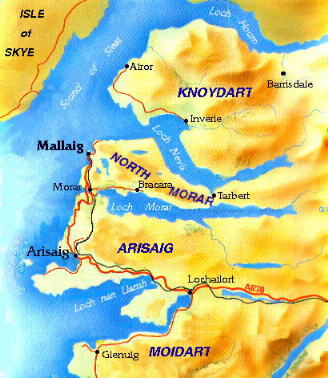 It is an area of rugged terrain divided by a series of fiord-type sea-lochs, lying east-west. Until recent times this made access from the east extremely difficult and most travelling was done by water. In the early 19th century the first road into the area was built, from Fort William to Arisaig, and in 1901 the West Highland railway was extended to Mallaig, but even today the peninsula of Knoydart has no road links with the rest of Scotland and travel in or out is by sea or by a lengthy trek over the hills to Kinlochhourn.

Where there were once many settlements around the shores of Loch Morar and Loch Nevis, the growth of Mallaig as an important fishing port means that few of these survive and the majority of the population live in the modern villages of Mallaig, Morar and Arisaig. The Knoydart peninsula, once home to a thousand people, saw a third of these forcibly evicted during the notorious Clearances and has now about 70 inhabitants, most of whom live in Inverie.

EARLY HISTORY: The abrasive effects of wind and rain have left us little from which to learn about the early inhabitants of the area. Those clues which remain yield little information: strange earthworks near Inverie, a crannog (lake dwelling) near Arisaig, vitrified forts along the Arisaig coastline and at Doune in Knoydart. The first settlers probably made their way north shortly after the last ice age and would have been hunter-gatherers, collecting shellfish from the shorelines in a way that changed little for thousands of years. After the Roman conquest of Britain the Roman Governor of Britain Julius Agricola led military campaigns between AD80 and AD84 which ventured as far north as the Moray Firth in attempts to subdue southern and eastern Scotland. Roman legionaries never seem to have ventured into the Western Highlands although in later years Roman ships passed fleetingly along the west coast making little or no contact with the people, most of whom were Celts, although it seems probable that people of an earlier race survived in more isolated areas.

By the end of the 5th century we know a little more about the people of the north of Scotland, through the writings of early Christian monks in Ireland. North of the Forth-Clyde line there were two Pictish Kingdoms, Southern Pictdom based on Fife, the valley of the Tay and the Mearns, and Northern Pictdom, with its capital near Inverness. Little is known about the Picts, even how they got their name, although they may well have come from Ireland, like later invaders, the Scots. The Rough Bounds was undoubtedly part of Northern Pictdom, although its Pictish inhabitants have left nothing that can definitely be ascribed to them. Although we know so little about the area at this time, it is reasonable to assume that there was already considerable traffic and communication between the west coast, the Hebrides and northern Ireland, mainly by island-hopping, using the tiny vessels called coracles.

THE SCOTS: The Scots were an Irish tribe from what is now County Antrim. In the year AD 500 three tribes of Scots migrated to southwest Scotland and established the kingdom of Dalriada. These three tribes were led by three brothers, of which the eldest, named Fergus Mor, established his king's seat at Dunadd near Crinan and settled his people in Kintyre, Arran and Bute. His brother Angus and his people occupied Jura and Islay, while the third brother, Lorne, settled in Colonsay, Lorne and the coastland north to Morvern. The southern part of the Rough Bounds, the peninsula of Ardnamurchan, came to form the disputed territory between the northern territories of Dalriada and the ill defined southern border of Pictdom.

The following two hundred years were to see the gradual expansion of the Scots at the expense of the Picts culminating in the crowning of Kenneth MacAlpin as the first king of a united Scotland in AD 843. Although there was intermittent warfare between the two kingdoms the success of the Scots was finally due to their ability to exploit marriages between Scots and Picts - since conversion to christianity the Scots had adopted a system of patrilinial succession, whilst the pagan Picts followed a system of matrilinial descent, in which a Pictish king was succeeded by his mother's, sister's or daughter's son. Dalriadan kings married Pictish princesses, then claimed their wives' inheritance.

The Dalriadans were a maritime race and possessed a large fleet of galleys, which they used to extend and maintain their influence over the islands and the western seaboard of Scotland. The Rough Bounds were among the first areas of Pictland to come under Scottish influence, although the scarcity of cultivable land meant that the Pictish population was probably quite sparse and this, together with the lack of fortifications, suggests that any resistance to the newcomers was easily overcome. Moreover, from the early 6th century onwards the west coast and the Inner Hebrides were the focus of attempts by Irish monks to convert the Picts to Christianity.

THE COMING OF CHRISTIANITY: The first recorded Christian sanctuary was founded by St Oran, an Irish missionary from Tipperary, who established churches on Colonsay and Mull before his death in AD 549. St Brendan the Sailor established a church on Tiree in about 540 and twenty years later there were already small Christian communities in Skye, Raasay, Morvern and Lewis, showing clearly that there was already considerable maritime traffic between Ireland and the Hebrides. Then in AD 563 Saint Columba landed on the island of Iona and from there pursued a double mission to bring Christianity to Western Scotland and to promote the interests of the kingdom of Dalriada. One of his first acts was to travel up the Great Glen to the court of the Pictish King Brede, where he negotiated a peace between Dalriada and the Alban Picts which was to last until Brede's death. He is recorded as having visited Eigg, Skye and Ardnamurchan and is thought to have founded a monastery on Canna. There are several placenames through the Rough Bounds beginning with 'Kil' , meaning 'cell', indicating that a monk or missionary once lived there - Kilchoan in Knoydart and on Ardnamurchan, Kilcumin in Morar and Kilmory in Arisaig.

This page will be added to to cover the history of the area up to the division of the Clanranald lands. Separate pages will continue the stories of the different districts of the area - Knoydart, Morar, Arisaig, Moidart and the Small Isles.

Meanwhile we recommend the following links relevant to the area's history:

Clearances and the Application of The Poor Law in Knoydart